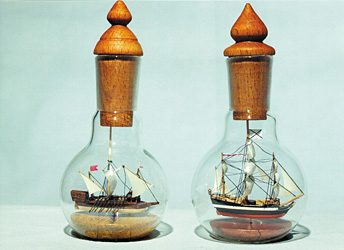 From time to time every boat model maker has a desire to create something extraordinary; in this chapter I will reveal some of the methods to make such ships.

What does a compass look like? It is very simple: a magnetized arrow revolves on a non-magnetized needle. Due to the magnetic fields of the Earth, the one end of the arrow always turns to the south, the other to the north. You are going to make the same thing, but a ship model will stand for an arrow ... 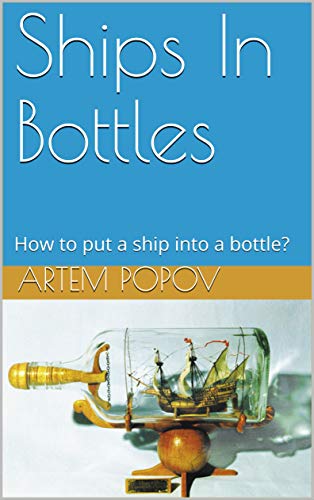 What if you try to make a ship hanging on chains attac hed to the stock of the cork? It won’t be difficult for those who have read this book carefully.

Assemble a model using one of the described methods (for instance, “A Joke”), attach pieces of thin but strong chain to the front (the bowsprit) and the back parts of the vessel. Affix wooden stoppers to the other ends of the chains (pic. 59).

A cork is an essential part of all our ship models in bottles; it is an element of design as well as the ship itself. Let’s make them even closer to each other. What if a ship will become a stock which “lo cks” the bottle from the inside? Your knowledge is already enough to carry that out.

Place a bottle with the neck down; in this case the cork can also be a stand. The model is put on the end of a vertically standing cork.