Different methods require different tools. Though you will still be able to use some of the described above. My experience shows that a universal instrument doesn’t justify hopes, and it is more convenient to make a separate tool for every step (I am talking about work inside a bottle). The steps to be taken/made are the following:

A Tool for Applying Glue.

You are already familiar with one of them – a long steel stick with a spatula on the one end and a piece of wire on the other. You can’t do without it if you need to apply a tiny amount of glue. And you could keep going without it if there was no need to use a large amount of glue at once, for example, to stick a stand to glass or gluing together the parts of a model. In this case you can use a tool shown on pic. 31.

To make it you will need a medicine dropper, spray bulb, some pieces of copper or brass tube of different diameter. The structure is clearly seen from the picture: heat the thin end of the dropper on a gas burner and bend it until it reaches the angle of 90 degrees. The transparent tip helps control the amount of glue; moreover, if you make a few tips of different shape, you will be able to pour glue in any hard-to-reach place. The ready tip is put on a long tube on the other end of which there is a spray bulb; it helps fill the tip with glue and squeeze it out. Cut the thinner pipe and insert a thicker one with a hole in it, it will help you to control the amount of glue coming out of the tip.

A Tool for Holding and Gluing a Stand.

To stick a stand to the bottom of a bottle , you need to apply some glue to the glass and put the stand on it; in this case a special tool is used. Attach a pair of pliers to a long thin copper pipe, put on a bigger tube on one end; by moving it you will be able to grip and hold an item (pic. 32).

Of course, you can use the instruments described in other sections as well, but it is much more comfortable to work with this one.

pic. 32 - A tool for holding and gluing a stand

Assembly of the body.

During the process the pats of a body are joined together and put on a stand. The tool used for that is similar to the previous one; the only difference is in the shape of its “jaws” – they are bent so that you can grip any tiny detail (pic. 33)

I have already described a device made of a long tube and a piece of fishing line. You can use it for masts as well, but I’d recommend a more complicated instrument. It has a little clip attached to a piece of flexible wire which goes through a long thin tube. Thanks to a spring, when the wire is loosen up, the clip holds a mast tightly, and when you pull the wire the clip opens up (pic. 34) 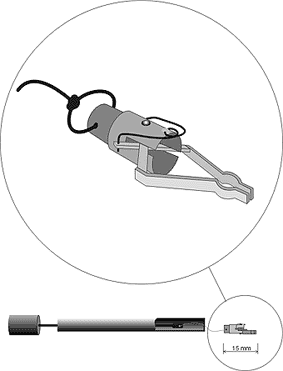 pic. 34 – a tool for installing masts

Put a mast into the clip and loosen up the wire pushing the whole thing inside the bottle; now pull the wire a bit to make the clip go inside the tube, it enables you to put the mast in a proper place. In the end just pull the wire stronger and release the mast (pic. 35)

pic. 35 – put a mast into the clip, loosen up the wire and push the whole thing inside a bottle

You can use the same instrument for work with rigging inside a bottle though there is a better one which supplements the former. It is simple but handy; usually it is the main tool of a model maker when he works inside a bottle (pic. 36) Simply attach clips joined with a joint to a long pipe. You can operate it with a long steel rod. This device helps you tightly hold a rope.

pic. 36 – a tool for putting threads through

The main tool you use for it is the described above long rod with a piece of flexible wire and razor on its end; usually it is very handy, but sometimes when you need to cut off ropes on a mast or a yard it is useless. You have to use two devices at a time which is not very convenient. That is why you need a tool that would combine gripping and cutting functions. I t is similar to the already described tool for body assembly: hold a thread with clips and then spin around the pipe with razor cutting the thread (pic. 37)

pic. 37 – a tool for removing threads

You must have noticed that most of the instruments used for work inside a bottle are made of long pipes and have the same mode of functioning, and using it you can create some other useful tools. Besides, the tubes of such tools can have any length which allows you to work with bottles of any size and volume.

In conclusion to this chapter, I can say that now you know some secrets of making those unusual models of ships in a bottle, body and rigging as well as some tools for it. But don’t forget that the real secret is in scrupulous work, careful making of tiny details and a constant pursuit of new ideas.

To make your work easier, the next chapter is dedicated to description of little secrets which will allow you to make some details of a ship with accuracy. It will be interesting not only for those making ship models in bottles, but also for people creating miniature table models.