As any picture, a ship model need s framing to look worked up. An unusual cork and a stylish stand can do the trick. A lot of boat model makes don’t pay much attention to them after working hard on making a fine model. However, the cork and the stand can turn a plain ship into a gorgeous one. What does “an unusual cork” mean? It’s a cork sealed from the inside so that it can’t be taken out without breaking the bottle. Such corks were made by skilful boat model makers in 17-19 th centuries. Their masterpieces are kept in museum and still admire people. Some secrets have been found and some had to be invented again.

On old pictures you can often see bottles with corks sealed with a wooden stock from the inside; unfortunately, their makers can’t tell us how they did it; let’s try to do that ourselves.

One of the most antique models is in a museum of a German city of Lubek. It is a huge three-masted warship in a big glass oval bulb. This model is extraordinary because the bottle stands on its cork which is also a stand. That is how it could be made (pic. 49).

The structure has three main parts:

The assembly goes is the following way:

Tie a thread or even a fishing line to a peg end and put it through the cork and the stock. Afte r they are inside and the cork is in its place, pull the thread installing the parts onto designated spots. Apply some glue to the opening in the cork to fix the whole thing.

Such a structure can be used when making a simple cork which is not joined to t he stand. In this case you don’t have to make a through hole; just drill a hole of 0,5-1,0 mm in diameter to the depth of 2-3 cm on the side through which you will pull the thread out. The procedure is the same: pull both ends of the thread to install the parts on their place and pull just one end to take out the thread. Such a thread appears almost in all methods of assembling of corks-puzzles; it’s used for pulling out threads and putting the details into their places. 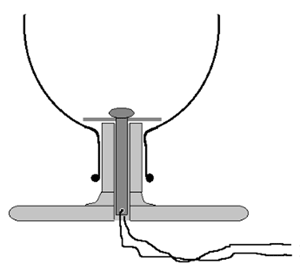 pic. 49 – such a cork consists of three parts

You can also cork up a bottle from the inside. The head and the cork are made separately; then the cork is pushed inside and the stock is inserted as well; after that the bottle is corked up from the inside. Only after that you can attach the head. If the work is done neatly, the seam between the cork and the head will be almost invisible. Using this method, you can make a cork with a very complicate d stock which can’t be made in any other way (pic. 50) 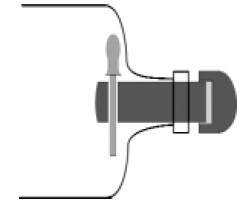 pic. 50 – a bottle can be corked up not only from the outside, but from the inside as well

There is another way to do that when a cork and a stock remain whole. It is the simplest and most common technique of making corks-puzzles. Put a thread attached to the stock through the opening in the cork. After installing the stock inside, the thread is pulled out (pic. 51). In this case the stock is a bit shorter as the s ides of the bottle limit its length preventing it from installing into its place. However, you can double the length of the stock.

The secret of this cork is in the stock which consists of two parts. They are inserted into the cork from different sides and look like a unit when assembled. 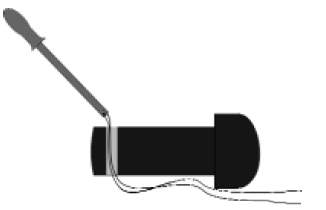 pic. 51 - Put a thread attached to the stock through the opening in the cork. After installing the stock inside the thread is pulled out

Make sure that the stock halves don’t go through and are not in each other’s way. For that, in the middle of a hole designated for the stock leave a little bridge with a hole for threads. The details of the stock are fixed with glue (pic. 52).

In the method described above the stock is attached rigidly to the cork, but if you make it movable, the effect can be intensified. The secret is in the structure of the stock – it is hollow inside, i.e. it looks like a wooden pipe. 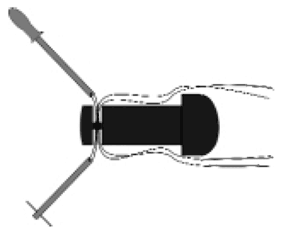 pic. 52 – the parts of the stock inserted into the cork from different sides look like a unit when assembled

You can make it using a turning machine or manually by drilling a hole in a wooden work piece (pic. 53). The pipe is cut into halves, then at an angle.

pic. 53 - The secret is in the structure of the stock – it is hollow inside, i.e. it looks like a wooden pipe

To make the parts of the stock look like whole wooden sticks, the ends are corked up with corks made of the same material. You can even decorate it with a bow, ring, or any other detail.

The halves of the stock will be joined with a wooden pin which is inserted into one of the pipes (pic. 54). Drill two holes: one on the end of the pin and the other on the opposite end of the stock. You will need them to pull through a thread to join the parts together. You will also need to put the parts inside a hole in the cork. Thanks to the thread, the detail with the pin will do it easily, while the second half will need a thread which can be attached to the sides. 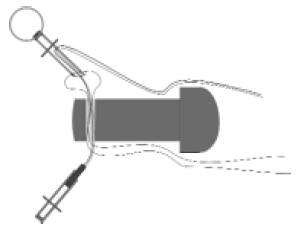 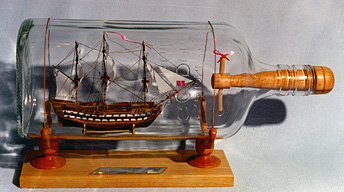 Before putting a model in the bottle make sure all the parts are joined together and the process will go off well. Apply some glue o n the inner surface of the stock and immediately insert it inside. The part without a pin goes first; then the bottle should be turned so that the stock does not fall, after that you need to remove the temporary thread. Next, insert the second half and when both parts are joined correctly the thread should be removed as well (just pull in by one end). Such a stock will move freely inside a bottle looking like a whole one. However, to prevent people from seeing the joint, you can attach sticks to the stock which will limit its movements.

Making such a complicated cork requires accuracy and carefulness. Pay attention to the glue you use: it should not dry out until you assemble the model. Also some kinds of glue leave a thick seam which can cause difficulties after applying.

Now let me introduce you a structure that does not require so many efforts.

The secret of it is in the shape of the cork and the hole in it. The stock looks like a plank with an oval hole in the middle; the end of a cork has the same form. When you put the stock on the cork and turn it to 90 º, the structure will be fixed. To keep the stock in place before the cork is inserted, just turn the bottle upside down (pic. 55)

Of course, you will have to make sure the stock remains in its place, though it will not happen if a bottle has a flat or oblong shape. 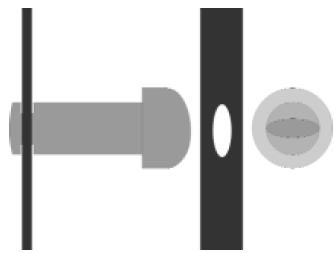 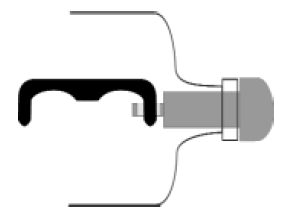 pic. 56 – the construction easily goes inside

And in conclusion, one more effective and at the same time easy structure. The stock in it has a rectangular section; and at first sight it seems that it will be more difficult to insert it inside, but it turns out to be vice versa. The secret is in the shape of the stock (see picture 56). Such a stock can be easily bent forward without being taken out of the bottle opening. After inserting the construction into the bottle, just turn it slightly to put the stock in its place (pic. 57) 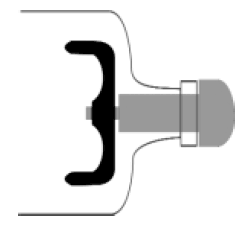 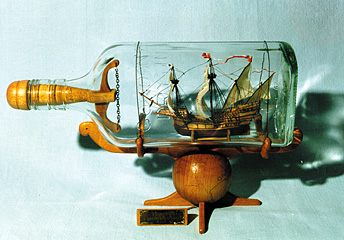 pic. 57 - turn the stock slightly to put it in its place

The fact that the stock never leaves the hole in the cork allows you to add some unusual elements to it that gives the whole thing more mysteriousness. It can be a chain joining both ends of the stock , bows, rings, and even little locks made of wood. This construction is also interesting because it doesn’t require additional threads since the stock is put into its place by its own weight.

In this chapter I described jus t major methods of making corks-puzzles; you can invent your own ones by combining them and contriving new shapes.