Ships in bottles. How to put a ship into a bottle?

Some details of a sailing ship.

Before proceeding, let me explain you the functions of certain tacking of a sailing vessel. You might think that a ship is wrapped up in useless web of ropes, cables and cords, but it only seems so. Its structure was brought to perfection by masters during hundreds of years. It is hard to believe that in the rigging of a ship there is no unnecessary pope or detail. Each rope plays its own role and has its own name. We are going to tackle those ones that you will often meet in this book, but if you come across some unknown names, we advise you to look it up in a dictionary.

A sailing vessel has spars (pic. 1) and rigging. Rigging can be standing (pic. 2a) and running (pic. 2b). There are much more details but those particular ones make it hard to insert a ship into the bottle, though sometimes they vice versa help you do that. 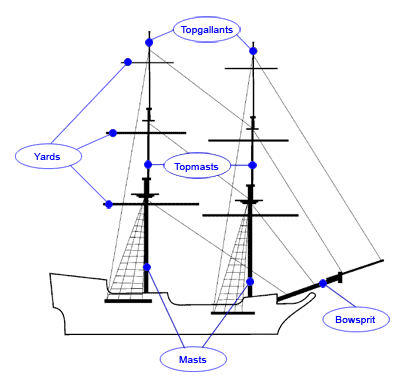 Pic. 1 Spars of a sailing vessel 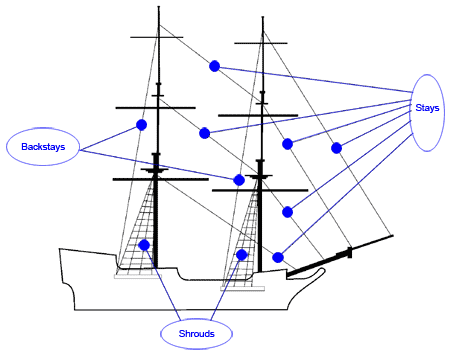 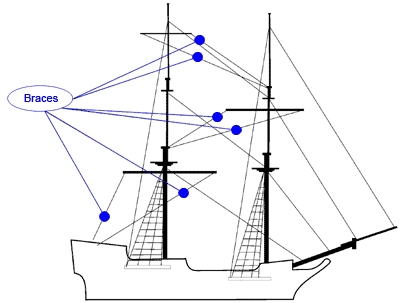 Methods of putting a ship into a bottle.

Every craft has its secrets; ship modeling masters have them as well. The major one is how a ship gets into a bottle with a narrow bottleneck. Uninitiated may have fantastic ideas from a bottle cracked into two halves and then glued together to a team of ants assembling a ship inside a bottle under the careful guidance of their master. We should reassure you: everything is done honestly and a ship is inserted into a bottle through a narrow bottleneck.

An interesting fact is that there are quite a few ways of putting a vessel into a bottle, and every master adds so much new to a traditional method that it becomes a secret.

What is good in this or that technique? It depends on your experience, skills and patience. One of them does not require complicated manipulations when assembling a model inside a bottle, but limits you in choosing a ship structure without giving you a possibility of working with complex models. The other, vice versa, allows you to choose any model though making assembling inside a bottle more difficult.

We are going to describe a few methods of assembling of a sailing ship; it will allow any reader, even a beginner, choose a good one.